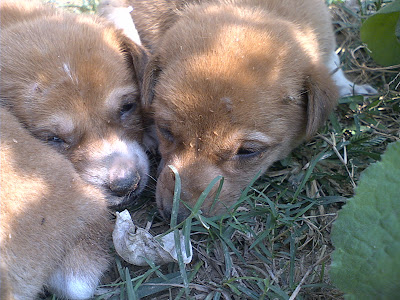 Last weekend I came across a bunch of three small puppies beside our boundary wall. There was no trace of their mother, though! The puppies were visibly ill, immovable and sick. Bugs and pests found their body a good place to inhabit. I couldn’t have much to do for them except shifting them a little so that they got enough sunlight to keep themselves warm. Winter has already set in here the northern part of India. The season is equally troublesome to the poor people and the inferior animals. Anyway, I forgot the puppies’ presence altogether until when in the evening I heard their cries. I and my brother took the searchlight promptly and rushed only to discover that two puppies were lying the same way on the ground.
We could not locate the third one. Mosquitoes also joined the insects to suck the blood out of the weak puppies. We quickly arranged for a jute bag and put the two puppies within it. We took them inside the wall into our garden. I tried to rub the bugs off their skin. One puppy was on the verge of death, it seemed, but still I felt heart beats as I touched it. My brother bought biscuits. But they were probably too young to eat solid food. I bought a tray of water and put it in front of them. Then as we were going to search for the third puppy, to our astonishment the mother came from nowhere and we could see the missing puppy sucking its mother’s breast. We were in a dilemma. Whether should we take the other two puppies back to the dark ground outside so that the mother can take care of them? Or should we somehow bring the mother inside? We decided to put the two puppies back on the ground. So we wrap them up in the bag and dropped them in front of their mother. The mother was so happy. It THANKED us by stretching its throat and making a peculiar sound. What a wonderful moment it was. But unfortunately, we found the next morning that the puppy whose condition was very bad had died. We found solace in the fact that two puppies had survived.
Posted by Avik Saha at 9:35 PM