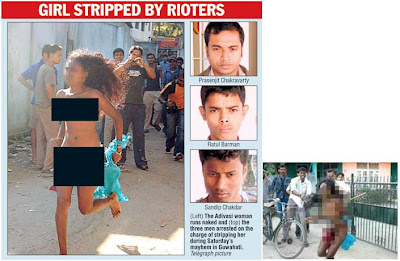 
This shameful act along with the other violent eruptions elsewhere in the country exposes the fallacy plaguing the society and the governments. The first question which comes to mind is why the Adivasis were demanding scheduled tribe status. We don’t have to go far to find the answer. This is because they were deprived for a very long time of all the facilities and amenities that an urban resident gets. It’s natural for them to seek the ST status which will entitle them to certain facilities like reservation in schools and colleges and in case of government jobs. The Gujjars of Rajasthan fought for the same reason earlier this year. Does anybody ever think while both the people from the villages and those from the cities vote the political parties to the government, why the city dwellers only live the quality life and the villagers lurk in the same darkness years after years? All the good schools, colleges, hospitals are in the city, while the villages have poor or mediocre educational institutions (sometimes not at all) and the villagers have to travel long distances to reach the primary health centers for basic medical facilities. Still there are so many villages without electricity. People in villages those not having land of their own to cultivate find it difficult to make two ends meet through out the year. Why the government is working towards providing villagers the quality of life they are entitled to in a snail’s pace? The sense of deprivation among the underprivileged is the root cause of the trouble. Maoists or other terrorist groups are the embodiment of this frustration of the deprived. All people in this democratic country should get equal opportunities. The government should ensure this. Instead of debating whether to increase or decrease reservation percentage in the educational institutions the government should work towards uplifting those left behind.
How callous the governments have become is evident from the Nandigram episode of West Bengal. When the political parties get the mandate from the people to govern, they deliberately forget the role they need to play. They can not differentiate the party from the government. That’s why the chief minister talks in terms of ‘our’ and ‘their’ while referring to the villagers!
It’s time for the both center and the state governments to work towards providing equal opportunities to the people of this country; otherwise the situations will spiral out of hand. Those in the govt. should devote themselves to the service of the people in right earnest, because this is what governance means. (Photo Courtesy: The Telegraph and IBNlive.com)
Posted by Avik Saha at 10:04 PM