After the serial bombing here a couple of years back and as a precautionary measure in the aftermath of last year’s Mumbai terrorist attack, Hyderabad has beefed up its security in almost all public places. We had had a first hand experience of this (frenzied) frisking last Sunday as we visited some, somewhat famous tourist spots around Sikh Village (where we, the interns of IIM Calcutta and Lucknow are staying).
As the blazing sun bowed behind the big buildings, Ganesh, Pradeep and me headed  towards the Hussain Sagar area on board an over-charged auto (thanks to our ignorance!). The necklace like bank of the big lake is beautifully dotted with the designer bushes and chairs (as you can probably guess, mostly couples occupying them!) alongside the busy Mahatma Gandhi Road (There is at least one, if not more, M G Road in each and every city and metro in India). The view of the sun setting behind the thin cloudy skin of the sky and the tinge of the water stirred up the shutterbug in me. There stands the statue of serene and sober seventeen feet ‘monolithic’ (so called as it is made out a single stone, I overheard a parent explaining this to his son!) Gautama Buddha, standing atop a stone structure towards the southern end of the lake, blessing all those who want to be blessed. There was an old fellow with an instrument which seemed to me a cross between a telescope and a binocular showing close-up view of the statue for two rupees. On his insistence, I put me eye behind the eye-hole and thereafter the lens of by Sony Cybershot to take a really nice dreamy shot! Though the water in the lake looks apparently clean, a closer look will show the waste dumps, floating plastic packets and all possible litter one is familiar with. Unfortunately or fortunately, few black ducks (as per Ganesh, though I have doubt whether they were ducks or other lower-end birds) swam happily in the murky water near the shore!

We walked ahead to reach the Lumbini park, overflowing with Sunday evening crowd. And there was the first frisking. The park organizes some kind of Laser shows, which none of us showed interest to. The park has a large rectangular water fountain (rather a waterfall over a steel or glass structure where one can sneak below the flow), a snacks corner, a mock bungee jumping pavilion for kids, a cricketing zone (machine bowling), a boating dock and other usual attractions (or distractions – you know what!). We directly proceeded to the dock yard and bought tickets for the boating trip. There were different flavors of boating - speed boat (really speedy!), boat with live dance performance (to recorded Hindi filmy songs) and normal boats. As you would have guessed, we bought tickets for the normal ones! These boats halt at the Buddha statue so that you can get down there and have a closer look (and of course have pop-corn and dirty the place – most people do not see the dustbins). There was second frisking at the time of boarding into the boat! The boats and the statue are maintained by the state owned Andhra Pradesh Tourism Development Corporation (APTDC). The ride and the roam around the statue were entertaining ones. The tune (some kind of Buddhist prayer, I guess) played at that site was contrastingly soothing in the hustle-bustle of the place. The statue was erected in 1992. Dalai Lama visited and graced it in 2006.
We got out of the park and walked towards Birla Temple. As we followed it, it started playing hide seek with us! Ultimately we caught hold of it off Reserve Bank of India branch. A typical setting of temple complex welcomed us as we entered the narrow aisle lined up with shops selling miniature idols of Hindu god and goddesses, pearl chains among others. There was frisking number three at the entrance. Here we had to part with our mobile and cameras too (not to mention the shoes)! Anyway, the temple, like any other Birla temple, was undoubtedly beautiful with its engraving of god and goddesses on marbles, meticulously placed idols at different turns etc. The Hyderabad city as seen from the top of the temple was awesome.
We returned to Paradise circle and decided to have Biriyani at Paradise hotel, the Biriyani specialist (I am doubtful!). Here is frisking no. four of the evening!
In spite of the slight inconvenience we suffered due to regular frisking at different places, I believe enhancing security this way is a right step towards eliminating risk of terrorist attacks. Other cities should take notice… 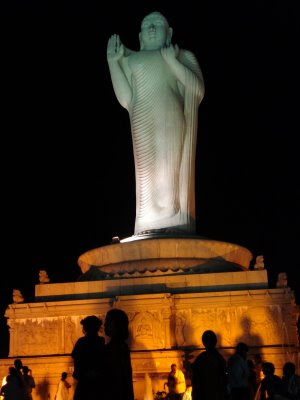