It was 7 in the evening. The Sun has already gone down behind the hills. But still there is light in the sky, Ah! That’s physics studied long back in school. A strong dust storm, which probably caused the power to go off an hour ago and the UPS-less-computers as well in the cybercafé where I was desperately searching for return tickets to Hyderabad on the refusing-to-open Indian Railways website, has resigned to a somewhat subdued wind spirals making scenic dust patterns on the dark roads. I walked purposelessly towards the Collectorate Circle, I discovered in the morning while looking for a pre-primary school on Meera marg. Quite-a-few busy fruit shops, ice-cream sellers and vehl-puri vendors lined up the Kabir marg side of the circle. I walked across the road and got on to the podium like structure full of large trees, symmetrically designed dry fountain pools and some tubular architectures - to be greeted by a few weight conscious evening-walkers, a lone Burkha clad woman sitting on a bench and a few children climbing up and down the pool walls. I got myself seated on a low marble wall to be mesmerized by the circling lights of the passing speeding cars and neon lights of numerous humorously named hotels around the place.
This is Jaipur – the pink city (well, not every house is painted pink though, but many of them), the third city, first two being Bangalore and Kolkata, on my survey list. A first time visitor like me, coming by train (not sure about the air) would get a glimpse of this historic hill-hidden tourist town by looking at the unique architecture of the railway station. Next unique things one would observe are the camel driven carts and the peacocks freely flying with countless other birds. The city has some famous forts – like the Ajmer Fort, the Tiger Fort and of course the celebrated Hawa Mahal situated adjacent to the crowded and congested Purani Basti and Chandpol market area, which I briefly visited the other day. In spite of all the glory, one can not miss the unmistakable foul stench of human liquid waste on most of the streets. Autos do not run on meters here (though they have a defunct one) and one’s bargaining skills will really be tested. I heard that the public transportation (as well as private transportation) is very good here, which seems true as I saw very few riding on these three-wheelers.
Not sure whether it’s due to the recession or due to the off-season, the occupancy rate at the hotels, at least going by the experience of the hotel where I stayed, is very less. As a consequence, and I guess it’s not the norm, they are trying everything to save every penny – like cutting on the duration of air-cooling the rooms, giving water-washed (I mean without detergents) upholstery (bed sheets, pillow covers, blankets etc), letting the guests perish in the heat when there are power-cuts, which happens at least once or twice a day, cutting on some menus at the restaurant (and thus getting rid of the cooks) etc!
I walked back to the hotel, as the black clouds rose well above the north-eastern horizon and the wind began to become stronger again. It started raining soon after accompanied by frequent lightening. It was raining the third consecutive day. I came to know later that this is quite unusual in Jaipur. 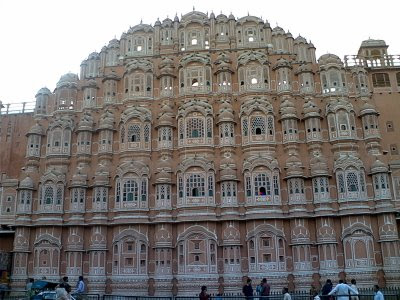