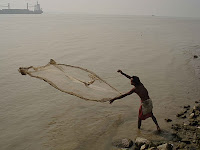 As the client and the onsite team members celebrated Thanksgiving in the US, the project team in Kolkata had their day-out at Raichak this Friday. Raichak is a weekend getaway around 50 kilometers south of Kolkata on the bank of river Ganges. The Ganges has become very wide here as it races to meet the Bay of Bengal just few kilometers away. The place is full of beautiful bungalows with large decorated lawns. The Radisson Fort (also called Ffort) is the most attractive resort at Raichak.
The bus route and boarding timings were mailed to us the previous evening. But as normally happens, the bus started more than half an hour late in the morning, jeopardizing to some extent the pick-ups of the people down the route. However, we later made up some of the delays and were on the way to Raichak, all set.
Read more »
Posted by Avik Saha at 9:38 AM 2 comments:

My grandmother died a few days back. She was ninety years old and died in her sleep of natural reasons. She was not well for the last few years of her life. She needed help for her daily activities. She was unable to move. She used to spend most of the time lying on a mat and hence, developed bedsores on her back. When I met her last time, around three weeks before her death, she was even unable to recognize me. Naturally, everybody was happy and relieved that she’s left for her heavenly abode.

I just finished reading the book ‘Chariots of the Gods’ by Erich Anton von Däniken. In the book, written in 1968, the author claims that the human history was influenced by extraterrestrial (people from other planets) intelligent lives in the distant past and he gives numerous examples of unexplained things on earth to justify his claim. According to him, our Gods might be the people from other planets in the universe with enormous powers, whom our ancestors worshipped.
Read more »
Posted by Avik Saha at 2:03 PM 2 comments: