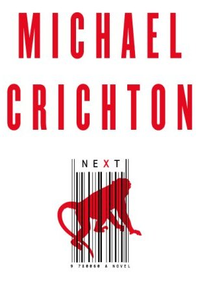 I finished reading the book ‘Next’ last night. ‘Next’ is Michael Crichton’s final book published before his death (on Nov 4, 2008). The book which revolves around genetic research, gene patenting and breeding transgenic animals is an awesome read. The book is a work of fiction based on facts which the author separately mentions. The story builds on lives and works of different protagonists spread across different cities of America and beyond. The common theme which unites them is their involvement in genetics, in one way or other.
UCLA (University of California, Los Angeles) gets patent on Frank Burnet’s unique cancer fighting tissues and licenses it to a pharmaceutical firm - Bio Gen. But eventually Bio Gen loses the tissues as its ‘philanthropic’ financier Jack Watson plots to remove the CEO, Rick Diehl in order to take over the firm. Bio Gen thinks that as a license holder of Burnet line of genes, it is the owner of Frank Burnet’s and their descendants’ – his daughter Alex Burnet and his grandson Jamie Burnet – bodies! So, when Frank goes into hiding, Bio Gen set a bounty hunter on Alex and Jamie to forcefully collect tissues from them. It gives rise to interesting court cases!
Henry Kendall of NIH (National Institutes of Health) creates a transgenic ape, Dave, when he implants his gene in the egg of the mother ape. The mother dies but the child – half ape half human – survives and goes on to live with the Kendall family. Interesting series of events unfold in the Kendall family as a result of Dave’s presence.
In Paris, Evan Gail, a geneticist, creates a transgenic grey parrot that can not only talk and mimic but has intelligence to solve math problems of Evan’s dull son. The bird, Gerard – who declares many times that it’s not a bird – has an eventful journey to America, thanks to being kidnapped by Evan’s husband. Gerard makes everybody around him mad by his constant chatter but ultimately he plays crucial role in foiling the bid to forcefully remove Jamie Burnet’s tissues.
In the jungles of Indonesia reporters find orangutans speaking two languages. In Costa Rica turtles with glowing back are found.
Adam of Bio Gen accidentally applies the spray containing experimental ‘maturity gene’ (for rats) on his drug-addict brother and alters his behaviors. His brother quits drug, becomes a sensible person, and goes back to work. But soon his hair grays, face becomes wrinkled – he gets old all of sudden!
Jack Watson, the Bio Gen financier and a staunch supporter of gene patenting, who was on the brink of taking over Bio Gen, thanks to his successful plot, suddenly knows that he is suffering from a rare genetic disease. Only a gene transplant can cure him. But the gene in concern was discovered and patented 5 years back. As a result, almost no research and experiment have been done on that gene. Even if Jack gets the license of the gene paying a huge price, doctors will have to blindly do the ‘illegal’ procedure with less than 1% success rate. Doctors in America refused to do it. Jack finally got it done in Shanghai but he dies.
Crichton’s storytelling, as always, keeps you curious and on the brink. Like in ‘State of Fear’, he ends the book with some notes which need contemplation. He says gene is a fact of nature like light, air, minerals etc. So gene cannot be patented. The procedure to cure a particular genetic disease might be patented. He also stresses the need to come up with clear guidelines on uses of human tissues. One’s tissue is one’s own property and we should have control on our tissues. He is also vocal against ban on gene research proposed by different religious and ethics groups. A ban cannot be enforced. Somewhere it would definitely happen, he says. Finally he opines research on genetics should be transparent. Law should require the practitioners to report the results – negative or positive – to the public at large.
Posted by Avik Saha at 4:39 PM