My Republic Day Out

My friend, Avimanyu, and I were initially planning to visit the Red Road area to witness Republic Day Parade on 26th January. But I was unwilling to get-up early on a holiday. Avimanyu too later remembered that his cook would be coming in the morning. Hence, after our hour-long chat on 25th night, we kept the option open for the next morning.
On 26th morning we took an impromptu decision to visit the Maidan area of Kolkata. Our intention was to click some good photos in and around the area. Maidan is a big ground at the heart of Kolkata and it is rightly called the lungs of the city. This plot of land is used by different political parties to hold meetings. Prior to being banned on pollution concern, various fairs, including the Kolkata book fair were organized here. On normal meeting-free days, joggers and morning walkers use this place; children and youths play cricket and football; couples sit and chat; some families come for outing and the bhelpuri wallas and puchka wallas sell their stuff to them. On 26th, this place becomes more crowded with the people who come to visit the parade.
We took a bus and after braving a chock-a-block traffic, reached the place around noon. The left-over of the morning parade – home bound crowd and retreating police cordon – greeted us there. A little girl balancing on a rope in front of the Sahid Minar attracted our attention. We saw and captured the tricks as did the gathering, but without bothering to pay the performer! There were few professional (or pro-amateur) photographers capturing the action with their sophisticated lens laden cameras. Somebody’s profession is the subject of somebody’s passion! We also saw a Tarot reader nearby blurting out people’s future.
We walked along the Mayo road, passed a cannon replica and entered into the vast expanse of the Maidan. As we walked leisurely across the impending ground, we took photos of colorful people around us, the food vendors and of the Victoria Memorial at the far end. It took us almost forty minutes to reach to the other end. We walked to the nearby Maidan metro station. Avimanyu took the train to his home. I took the train to Tollygaunge. I was to attend an ex-colleague’s invitation for lunch.
Today’s children are so smart! They quickly make friends with strangers, they give witty answers to your questions, they pick up what you are talking about and make interesting comments which make you laugh! That’s exactly what I found Kalyan da’s four year old daughter, Jhinti like. I had a gala homely lunch thanks to Kalyan da’s wife, Sudeshna. Kalyan da showed me his nice flat. He moved in here last year. The only drawback of the flat is that it does not have a garage.
My next destination was the Kolkata book fair. The fair was inaugurated on 25th and was thrown open to the public from 26th Jan. As entry was free this year and as it was a holiday, the place was decently crowded. My friend Kousik and I went in around 4.30. Avimanyu joined us an hour later. USA is the theme country this year. As a result it got the most attention with a White House replica at the center of the complex attracting lot of people. The authority this time is trying to promote renewable energy – the complex has a good number of solar lights and there are many banners promoting use of biogas. Another new this year is the laser show depicting India US relations. We also noticed the Bengali actress Paoli Dam. But it seems she is yet to have a fan following. I ended up buying couple of books – Daniel Goleman’s ‘Emotional Intelligence’ and Yann Martel’s ‘Life of Pi’.
Next we headed for our dinner at China Town. At the entrance we were told that it was a ‘dry day’. But we were in no mood for drinks. We ended up having Schezwan noodles with a handful of chicken items. But the food was not up to our expectation.
In the end, I would say the day was more hectic for me than a typical work day. But I enjoyed it thoroughly and hoping for more such fun-filled, action packed days ahead. 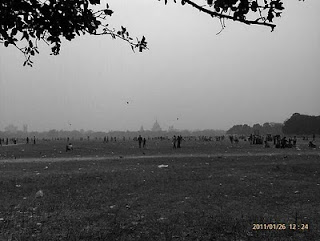