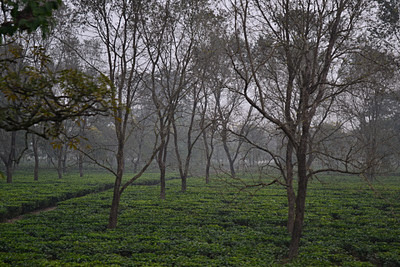 For the last few days I was reading about taxi refusals in the newspapers. Taxi drivers in Kolkata very often readily refuse you or charge you extra if your route does not suit them. I faced it myself, not the first time though, in the evening of last to last Friday. We (Avimanyu, Manisha, Ananya, Trishit, Lahiri, Soumik, Sonali and me) were to go to Sealdah station from our offices in Salt Lake. An impromptu plan was made within the previous few weeks to have a whirlwind weekend trip to Dooars. But we had the share of trouble when you plan something on short notice. We could not get the hotel/bungalow we wanted (but the accommodation we got was not bad either as I will elaborate later). Getting rail tickets was another big challenge. We also at some point thought of booking ourselves seats in a bus, in spite of the resulting hectic and long journey. But, thanks to Avimanyu’s trick (he booked break-journey tickets in the same train), our willingness to spend quite some extra bucks to buy Tatkal tickets through an agent and finally our luck, we ultimately had confirm tickets for both up and down journeys!

Being refused multiple times by the unruly taxiwallahs, we finally got a private car as our savior. (The credit goes to Sonali!). So Avimanyu, Sonali and me took it to Sealdah while others reached by some means or other. Some of us already had heavy evening snacks and skipped dinner while few had dinner at the crowded Comesum restaurant at Sealdah station. I forgot my comb; so bought a cheap one at the station, while few others bought some necessary stuff from the wheelers before boarding the train. The train, Kanchankanya Express, left on time.

We settled in two nearby coupes within the same compartment. But for next few stations it was unsettling as we needed to adjust with the daily suburban passengers who un-hesitantly hop on to reserved coaches. As we crossed Barddhaman, my home town, Sonali, Avimanyu and me climbed on to our berths. Others, I was told, played cards late into the night.

Coming to cards, I shall make a candid confession here. When I was a boy I used to play some basic forms of card games with my aunties while I visited my maternal uncle's house during school holidays. But I lost interest in the game sometime down the line. In engineering college, my roomies could not even teach it to me. This illiteracy caused me awkward situations while I travel with friends. They play and I merely watch! (Well, I always carry novels for such situations!). This time it was no different, either. But, this time I resolved to learn a few card games before our next trip. Let’s see.

We woke up next morning quite early due to cold taking a toll on us. Trishit felt terribly cold as the windows of his favorite side lower seat malfunctioned. We also had to find the ticket checker. Our ticket was up to New Jalpaiguri Station. We were to extend it up to New Mal Jn. where our hired Tata Spacio was waiting. After making a few rounds of the train compartments we finally found the TTE sleeping in an AC coach. We also got the interesting information from him – TTEs sleep on seat number 7 in odd-numbered coaches (S1, S3, S5 etc)!
The next few hours were a visual treat. Foggy forests and vast tea plantations greeted us on both sides. The train made few unscheduled stops but we didn’t mind much. It rather gave us opportunities to take few beautiful snaps.
New Mal Jn. is a small yet nice station. (Though we would discover its unclean washrooms the next day) It’s crowded, nevertheless. To affirm our presence, we clicked a group photo below the board that proclaims the station’s name.
We had Puri, Sabzi and rassogolla at nearby Mal bazaar town before heading for the Suntaley Khola river camp. We stopped on the way to stock our evening snacks and to tend to Trishit’s hurt middle finger. We took left at Chalsa and proceeded via Matelli bazaar and Smasing driving through endless tea gardens.
The picturesque river camp is at the foot of a green hill. Four residential tents and one cooking-cum-dining tent dotted the landscape. A small wooden bridge over the rocky stream connects the camp to the road. The residential tents with attached bathrooms are on cement platforms whereas the dining tent rests on wooden beams. The beauty of the place no doubt bowled all of us over. Avimanyu, a bird-enthusiast, spotted few white capped water redstarts and captured them in his camera (my attempt failed).
We placed the lunch order – rice, daal, alu-gobi sabzi and eggs – with the cook-cum-caretaker; bathed in the hot water and set out for a walk around while our food was being cooked. The sky was gloomy with mix of cloud and fog. There was a hanging dilapidated bridge nearby with the warning that no more than four persons were allowed at a time. We had photo sessions on and under the bridge; however, given the low light it was not ideal for photography. When we returned, the lunch was ready.
Post-lunch we drove to two places – Shakamb and Rocky Island. Both of them were basically picnic spots that boast a bridge over a mountain stream. These places were dirty and didn’t impress me much. On our return to the camp, we got off the car and walked the last mile in the approaching darkness of the evening.
The evening was special. We lit a bonfire, roasted chicken, ate, sang, danced, gossiped and had lot of fun till late into the evening. The night was very cold. The fire felt comforting. Later when the fire was extinguished and we retired into our rooms it was chilling.
Another confession. I can shake a leg, though incoherently, but singing does not come to me naturally. (Remembering Memphis, the penguin in the movie Happy Feet). I love songs, sing silently; I used to play few musical instruments; but I am scared to death when it comes to vocalizing the lyrics. Like inaptitude in playing cards, this lack of confidence at singing makes me out of place when I travel with a singing-happy group. Well, this is another of my resolutions this year – learn to sing!
We got ready early next morning. The destination was Gorumara forest. We had the information that the last safari in the morning was at 8 am. We reached the booking office at Chalsa well before eight and were told that the booking would start at eight for the safari at nine. So we finished breakfast and came back to the booking office. The Safari was quite costly. The cars alone cost us 800 rupees each. The booking officer, without asking us, charged for two guides which was not required. Later we would also discover that the safari was only up to a watch tower in Chapramari, only a brief stretch of the forest.
The ride on the open roof Maruti Gypsy was fun. As the cars raced on the smooth roads through the forest, cold air cut across our faces like sharp knives. The gate to the Chapramari forest opened at 9 and we approached to the three-storied watch tower overlooking a big lake. The lake, understandably, caters to the jungle animals. Some of us spotted a bison. A rhino appeared after a while and lingered on until we got bored of it. Though we did not see any other big animals from the tower, a handful of birds – a Stork, a Sun Bird and few Brown Shrikes - paid us a visit. Without further hope of spotting any other animals we came back to Chalsa, took our hired car and went back to Suntaley Khola via Murti. In Murti, it’s again a narrow bridge over a mountain stream. It’s a picnic spot and the place is strewn with discarded paper plates and human wastes.
Back in our camp, we quickly vacated our tents, had lunch and wandered curiously into the forest. After walking for some time, we discovered a trek route, which as told by a passing wood cutter we met on the way, leads to Lava. The route covered in dense forest was beautiful and we preferred to walk some more. But we had to return; hence we came down and left for Damdim.
Damdim, famous for its tea gardens, is a small town on the railway route. We visited Lahiri’s relatives there, had delicious foods, roamed in the tea garden, plucked some tea buds and then left for New Mal Jn. station. We had our return train in the evening. 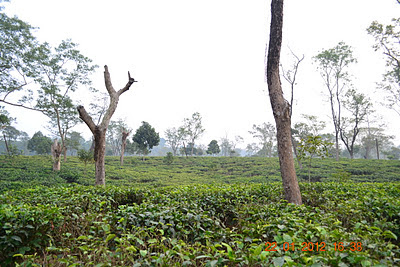