Last week we were looking for a weekend getaway. We had been to hills (Edale, Peak District) earlier the month. We thought, 'Why not to the sea this time?' The east coast of England is near to Leeds, our home for last five months. We had been to Scarborough before. However, the weather forecast was not promising - it predicted shower in the north-east, whereas western part of the country were to remain somewhat dry. So after little research we hit upon the Formby beach on the west coast - between Liverpool and Blackpool in Lancashire. It's among the 20 best beaches as per Telegraph.

I think UK's public transport network is one of the bests in the world. Without a car, while we look for a retreat we always check if the place is accessible via public transport. Formby was one such place. It is on the Liverpool-Southport northern line. We booked National Express coaches to Liverpool and then Merseyrail train from Liverpool Central to Freshfield.

Early on Sunday morning, the bus took us to Liverpool National Express coach station via Manchester. The Liverpool central rail station is 15 minutes walk from the coach station through Liverpool Empire Theatre, St George's hall, Lime Street station and St John's shopping center. The train travelled underground for some time and soon came overground exposing the dock area on the left. After rushing through a handful of stations we reached Freshfield within half-an-hour or so. 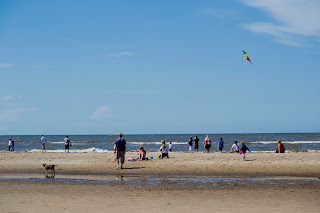 Out of the small station, we turned right and took the Victoria Road. The road takes straight to the beach - around a mile away. Large residential properties line the birch-covered street. We walked past the checkpoint (where one has to pay the car parking fee) and turned left to the red squirrel walk. We have read that there are many red friendly squirrels in this reserve. However, we were disappointed to find only two - one each on our two rounds around the wooded area. The red squirrels seemed not too fond of the humans!

Out of the squirrel walk we headed straight to the beach leaving the toilet, a gift shop and a food outlet behind. The high sand dunes block the view of the sea. As we climbed up the sands the blue sea under the azure sky made a grand appearance. This is a family beach. So no wonder that we found many families with kids and dogs either soaking in the sun or playing in the water or flying kites in the vast expanse of the beach. Seagulls were keeping a watch on us from overhead. A police car regularly patrolled the area. Series of air turbines stand in the distance on the south-west side of the beach. The Blackpool tower was visible far away on the right.

We spread the mats on the sand and had lunch. My wife headed for the water. I took the camera and captured the life in the beach. It was high tide. The water came nearer and nearer requiring us to pull our stuff further back twice. We spent a good three hours there.

As we headed back to Leeds, it's started drizzling, but we didn't mind - we had already made most of the day. 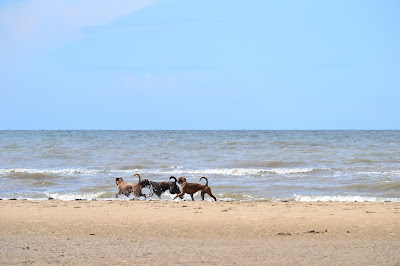