Visit to the majestic Lake District

We were finally to the land of lakes last week, the Lake District in the county of Cumbria of United Kingdom. Lake district consists of 16 large lakes (meres) and 200+ smaller ones (tarns). It is November, early winter and probably not the ideal time to visit this 'area of outstanding natural beauty'. However, there are significantly less crowd this time, hence the hills and the lakes were all ours!

We reached Windermere by train in the evening. Rail came to Windermere in 1849. William Wordsworth (yes, the poet) who was a shareholder of the rail company didn't allow the train to go any further into the lake district. He feared that it would result in influx of more tourists and development of the area destroying the natural beauty of the place. Nevertheless, the railway proved to be very lucrative. It brought 120,000 visitors in the first year itself from the industrial towns of Yorkshire and Lancashire.

Windermere is a quiet town. Small shops and pubs line the town center. It was earlier a hamlet called Braithwaite. 'Thwaite' is a Viking word, meaning clearing in the jungle. The Vikings, who arrived in Britain in c.800 AD, cleared small patches of the jungles to set-up their villages. There are however, couple of large supermarkets and shopping malls came-up near the rail station - Booths and Lakeland - the signs of development of the tourist town.

We spent the night in the Holly Lodge guest house on College Road. The economy of the area, not surprisingly, is dependent on tourism. Many houses here have been converted into B&B guest houses. Ours was no difference.

There is a Thai Brasserie on the Main Road where we had our dinner - aromatic crispy duck with pancake, Pad Mee (rice vermicelli noodles) and Thai chicken green curry. There were couple of Indian restaurants as well; however one of them, Indian Ocean, was closed and we got a very bad review of the other (from Google local). So, Thai was our choice for the night.

The next day was exceptionally bright and sunny. After having full english breakfast - bread, butter, tea, sausage, mushroom, tomato, egg poach and a muffin topped with smoked salmon and scrambled egg - we headed out to Windermere Tourist Center. We had a 10-lake day trip booked with Mountain Goat tours.

We - five tourists altogether - hopped into the small coach and set out for the lakes. Ambleside, on the side of the Windermere lake, the largest in Lake District, was our first stop. The driver cum guide told us about the history of the place including the devastation caused by the great floods of 2009. The river - Stock Ghyll (Ghyll is a Viking word for river) ran through the town. Over it lies the most photogenic building - the Bridge House, originally built as a covered bridge cum summerhouse and used by a local family to access their orchard across the stream. The building has been used for many other purposes over the years, including for storage. Records show that it was briefly used by a family of 8 in the nineteenth century. The owner interestingly (and rightly so) declined to pay land tax to the council arguing that building was on water and not on land! The dry stone slate walls are one of the most common and interesting sights in the area. The walls are made by stacking stones one on other without any cement or mud to glue them together. It is the weight of the stones that keep the wall intact for very long periods. There are even competitions among the people to build those walls.

We headed to Grasmere through the Coffin trail leaving Rydal water and Grasmere lake on the left. The Helm Crag (cliff) also known as the Lion and the Lamb for its such shape hovered in front of us. Grasmere houses Dove cottage, where William Wordsworth lived for 9 years (1799-1808) and the Daffodil Garden where he lies in the grave with his other family members. You might be wondering why coffin trail is called so. The ground at Ambleside is very hard and rocky. Hence, in the earlier days when somebody died in Ambleside, the coffin was carried to Grasmere for burial. There is also a large stone on the way where the carriers used to put the coffin while taking a break. Grasmere is also famous for Sarah Nelson's gingerbread. As we were about to leave, a beautiful European Robin gave us a surprise visit.

We drove through the west shore of Thirlmere lake keeping the Borrowdale fells on the left. Thirlmere lake supplies water to the Manchester city. The water flows through 100 mile of concrete aqueduct pulled by the force of gravity - what a brilliant concept! The Valve house (where the water enters the aqueduct) is visible on the eastern shore.

Our next destination was Derwentwater, the most beautiful of the lakes. We went up to the Surprise View through the famous Ashness bridge and behold, the deep blue Derwentwater was in-front of us. We even saw the Bassenthwaite lake far on the North. The Derwent river flowed into the lake from the South. There is a small footbridge, called Chinese Bridge near the river mouth (which appeared like a small speck from where we were lodged).

We next proceeded towards the Honister slate mine. The hills on our sides were all brown, thanks to the brackens, a type of fern which grows on these hills and turn brown in the winter. Ice was visible on the distant fells on the sides which do not get sunlight.

Honister slate mine is England's last remaining working slate mine. The visitor building is actually a live workshop where we saw how raw slates were being processed. The actual mine is a few miles up the hill. The mine company also offers mine tours and adventure experience to generate some more revenues. A shopping center selling slate products operates in the visitor building. The abandoned tramway, built to carry mined slates and the footpath over the Honister crag are an interesting view. We had a coffee in the mine cafe and continued our journey through the Honister pass to Buttermere and Crummock lake.

The Lake District landscape is dotted with Herdwick sheep. This variety was brought to Lake District by the Vikings. When the Herdwick sheep are born they are jet black. At around one year they turn chocolate brown. After three years they become silvery grey. So, by looking at the color of their body you can tell their age! However, their wool is very coarse. The wool is sometimes used in the roof to keep the room warm. Another sheep variety found in the nearby Yorkshire is called the Swaledale, identified by their curled horns.

We had our lunch at Keswick. Keswick has the famous pencil museum housing World's longest pencil (26 foot). Keswick was an important pencil making town until late eighteenth century thanks to availability of graphites in the nearby Borrowdale fells.

Out of Keswick, we headed towards the Castlerigg stone circle, a smaller version of stonehenge.Thirty eight Borrowdale volcanic stones, the largest almost eight feet tall, form a circle hundred feet in diameter. The circle itself is shelved in a rectangular enclosure. Nobody knows for sure why the people used it for. But generally it is thought that the circle, erected four or five thousand years ago had astronomical or timekeeping function. Nevertheless, this is a stunning plateau surrounded by high fells (Viking word for mountains).

We took A66, drove for sometime on the highway and then made a right turn at Troutbeck. Our next destination was Aira force waterfall. It is a stunning 70 ft waterfall on the Aira river before it meets Ullswater. The waterfall is a 15-20 minutes walk from the car park. The guide told us to look for red squirrel in the surrounding woods. However, the squirrels preferred to shy away from us. (We found red squirrels in Formby. Check Day Trip to Formby).

Next we visited the Ullswater lake. The lake and the surrounding mountains looked wonderful in the soft light of the setting sun - the most scenic view of the day, I would say. After spending some time there we headed out to Glenridding and then back to Windermere through Kirkstone pass and Troutbeck village.

The night was as dark as the day was bright. Back in the guest house, we took out our 10x42 binocular and went to the backyard. The sky was teeming with stars, many more were visible than we normally see from the city. We checked out some well known landmarks (or skymarks!) - Orion nebula, Andromeda galaxy, the rising Moon and Jupiter and the part of the Milky Way. A few shooting stars attracted our attention as well. But the cold overpowered us (it was below freezing) and he had to go back to our first floor room. We were so enamoured by the Thai dish the previous night, we again had Thai for dinner - this time aromatic crispy duck and Kao Pad Kai (egg fried rice)!

We had a half day trip (again with Mountain Goats) booked the next day. This time we visited the Great Langdale valley, Elterwater and the well-known Coniston water where Donald Campbell crashed his Bluebird in 1967. Langdale valley is one of the earliest occupied regions of the Lake District. Stone age axes, around 5000 years old have been found here.

In the afternoon we walked to Bowness-on-Windermere, a busy town housing The World of Beatrix Potter, England's major attraction devoted to the iconic children's author. Cruises start from the lakeside piers here. We spent the lazy afternoon sitting on the lakeside chairs watching endless gulls, pigeons and mute swans while munching Pizzas. As the evening descended on this majestic place we walked back to the Windermere station with a heavy heart! 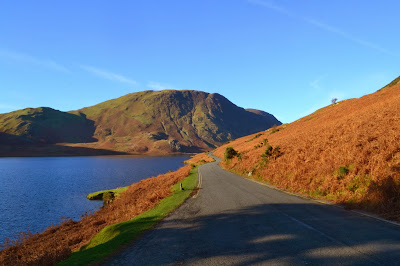